Drought has become an increasing natural hazard.  Although women are forced to bear the brunt of the consequences of climate change, they have been systematically excluded from decision-making mechanisms.

Nevertheless, women are contributing to both adaptation and mitigation efforts, and they are creating innovative and localized solutions to build resilient communities. 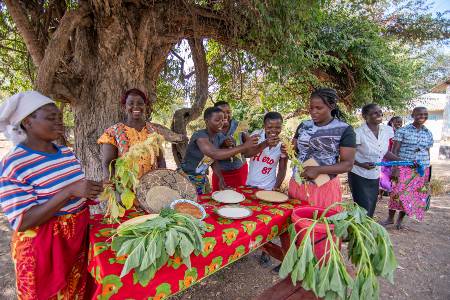 In response to the drought in Binga, Hwange and Lupane district in 2019, Ntengwe supported grassroots women advocates to ensure the disaster response and recovery process was shaped by women’s perspectives and responded to the common and differentiated needs of children, youth, families and communities.

A special focus in our Disaster Risk Reduction (DRR) work is put on increasing women’s engagement and leadership in DRR and Disaster Management and Climate Change Adaptation, through targeted capacity building, awareness raising and training, with the aim of moving women to the front row when it comes to debate and decision making.

We highlight gender-specific issues and successfully advocate for the adoption of local plans for the implementation of the Sendai Framework.  As a result, the districts, firmly continue to commit to gender equality and women’s empowerment.

Making a difference to the people of Zimbabwe

Ntengwe has been working with partners and allies for over 20 years in support of grassroots communities and social movements al local, national and regional level.

The page you requested could not be found. Try refining your search, or use the navigation above to locate the post.